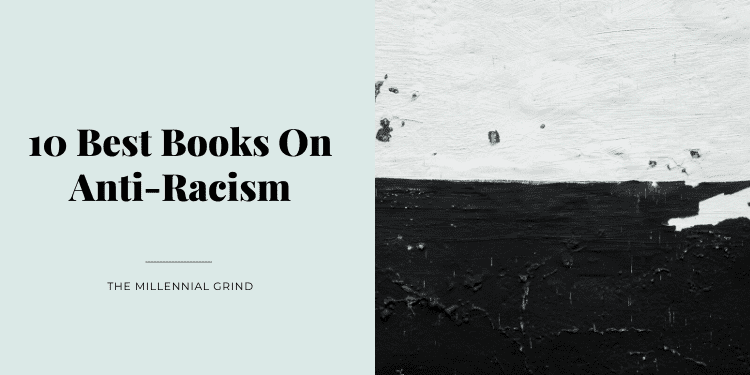 In 2020, being “not racist” is simply not enough. You are can be for or against racism, but there’s no gray area between the two. Being anti-racist is so much more than just posting a black square on your social media feed. It takes willingness and honesty to self-reflect and to educate yourself on the subject matter. One of the best ways to learn about what it takes to be an anti-racist is through reading. Below are 10 Best Books On Anti-Racism.

What’s the problem with being “not racist”? It is a claim that signifies neutrality: “I am not a racist, but neither am I aggressively against racism.” There is no neutrality in the racism struggle. The opposite of “racist” isn’t “not racist.” It is “antiracist”.

1. How to Be an Antiracist by Ibram X. Kendi

How to Be an Antiracist is one of the most recommended books on anti-racism. New York Times best-selling author Ibram X. Kendi takes you through a widening circle of antiracist ideas— from the most basic concepts to visionary possibilities. Kendi combines ethics, history, law, and science with his own story of awakening to antiracism. This is an essential work for anyone who wants to go beyond the awareness of racism to the next step: contributing to the formation of a just and equitable society.

Related Article: 30 Quotes from How to Be an Antiracist by Ibram X. Kendi

White Fragility is characterized by emotions such as anger, fear, and guilt, and by behaviors including argumentation and silence. These behaviors, in turn, function to reinstate white racial equilibrium and prevent any meaningful cross-racial dialogue. In this in-depth exploration, Robin DiAngelo examines how white fragility develops, how it protects racial inequality, and what you can do to engage more constructively.

3. So You Want to Talk About Race by Ijeoma Oluo

In So You Want to Talk About Race, Ijeoma Oluo guides you through subjects ranging from intersectionality and affirmative action to “model minorities” in an attempt to make the seemingly impossible possible: honest conversations about race and racism, and how they infect almost every aspect of American life.

4. Me and White Supremacy by Layla F. Saad

Me and White Supremacy takes you on a 28-day journey to do the necessary and vital work that can ultimately lead to improving race relations. This book will help you learn about anti-blackness, racial stereotypes, and cultural appropriation, changing the way that you view and respond to race, and how to continue the work to create social change.

5. I Know Why the Caged Bird Sings by Maya Angelou

Maya Angelou’s debut memoir is a modern American classic beloved worldwide. I Know Why the Caged Bird Sings captures the longing of lonely children, the brute insult of bigotry, and the wonder of words that can make the world right. This book will touch hearts and change minds for as long as people read.

6. The Autobiography of Malcolm X by Malcolm X with Alex Haley

The Autobiography of Malcolm X defines American culture and the African American struggle for social and economic equality that has now become a battle for survival. This book stands as the definitive statement of a movement and a man whose work was never completed but whose message is timeless. It is essential reading for anyone who wants to understand America.

7. Stamped from the Beginning by Ibram X. Kendi

Some Americans insist that we’re living in a post-racial society. But racist thought is not just alive and well in America. In this deeply researched and fast-moving narrative, Kendi chronicles the entire story of anti-black racist ideas and their staggering power throughout American history. In shedding light on the past, Stamped from the Beginning offers us the tools we need to expose racist thinking in today’s society.

8. I’m Still Here: Black Dignity in a World Made for Whiteness by Austin Channing Brown

Austin Channing Brown’s first encounter with a racialized America came at age seven when she discovered her parents named her Austin to deceive future employers into thinking she was a white man. Growing up in majority-white schools and churches, I’m Still Here details her journey to self-worth that led to a lifetime spent navigating America’s racial divide by helping organizations practice genuine inclusion and avoiding pitfalls that kill our attempts at racial justice.

9. Why I’m No Longer Talking to White People About Race by Reni Eddo-Lodge

Examining everything from eradicated black history to the political purpose of white dominance, Eddo-Lodge offers a timely and essential new framework for how to see, acknowledge, and counter racism. This book bravely explores what it is to be a person of color in Britain today — an essential handbook for anyone looking to understand how structural racism works.

10. Between the World and Me by Ta-Nehisi Coates

What is it like to inhabit a black body and find a way to live within it? How can we all honestly reckon with this fraught history and free ourselves from its burden? Between the World and Me by Ta-Nehisi Coates is an attempt to answer these questions in a letter to his adolescent son. Drawing from personal narrative and history, Between the World and Me shines a light on the past, confronts our present, and offers a vision for a way forward.

Do you have any other book recommendations on this topic? Share your favorite books on anti-racism in the comments below.

20 Quotes for New Graduates from In Conclusion, Don’t Worry About It by Lauren Graham

In Conclusion, Don’t Worry About It by Lauren Graham, the beloved star of Gilmore Girls, offers advice on growing up, pursuing your dreams, and living in the here and now. In her hilarious, relatable voice, Read more…

30 Life Quotes from Present Over Perfect by Shauna Niequist

Present Over Perfect by Shauna Niequist is an invitation to a path away from frantic pushing and proving, and toward your essential self, the one you were created to be before you began proving and Read more…

30 Quotes for Creatives from Big Magic by Elizabeth Gilbert

Big Magic by Elizabeth Gilbert offers potent insights into the mysterious nature of inspiration. Balancing between soulful spirituality and cheerful pragmatism, Gilbert encourages you to uncover the creative power that lives within you. Whether we are Read more…