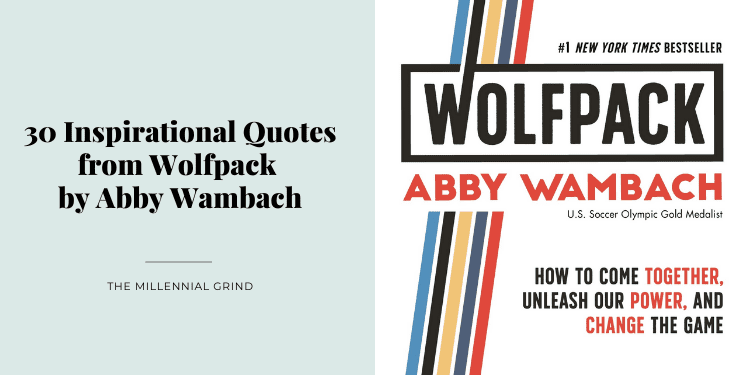 Wolfpack by Abby Wambach is an empowering rally cry for women to unleash their individual power, unite with their pack, and emerge victorious together. She insists that women must let go of old rules of leadership that neither include or serve them. In the book, Abby presents a new set of Wolfpack rules to help women unleash their individual power, unite with their Wolfpack, and change the landscape of their lives and world. Scroll down to read 30 Motivational Quotes from Wolfpack by Abby Wambach.

Get The Book: Wolfpack by Abby Wambach available now on Amazon.

30 Quotes from Wolfpack by Abby Wambach

Which quote from Wolfpack by Abby Wambach is your favorite?

20 Quotes for New Graduates from In Conclusion, Don’t Worry About It by Lauren Graham

In Conclusion, Don’t Worry About It by Lauren Graham, the beloved star of Gilmore Girls, offers advice on growing up, pursuing your dreams, and living in the here and now. In her hilarious, relatable voice, Read more…

30 Life Quotes from Present Over Perfect by Shauna Niequist

Present Over Perfect by Shauna Niequist is an invitation to a path away from frantic pushing and proving, and toward your essential self, the one you were created to be before you began proving and Read more…

30 Quotes for Creatives from Big Magic by Elizabeth Gilbert

Big Magic by Elizabeth Gilbert offers potent insights into the mysterious nature of inspiration. Balancing between soulful spirituality and cheerful pragmatism, Gilbert encourages you to uncover the creative power that lives within you. Whether we are Read more…