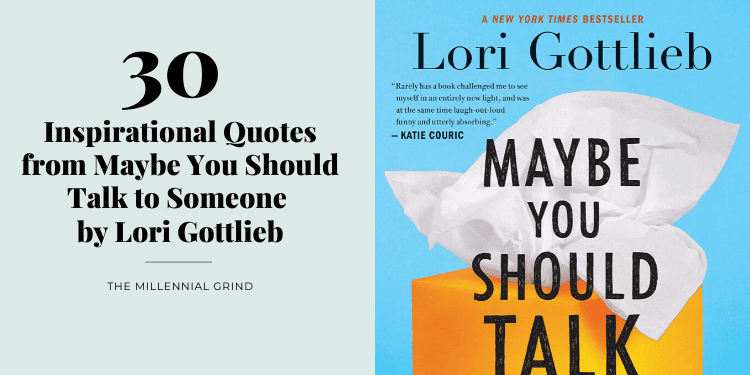 Maybe You Should Talk to Someone by Lori Gottlieb is a hilarious and thought-provoking book that takes us behind the scenes of a therapist’s world—where her patients are looking for answers (and so is she).

With startling wisdom and humor, Gottlieb invites us into her world as both clinician and patient, examining the truths and fictions we tell ourselves and others as we teeter on the tightrope between love and desire, meaning and mortality, guilt and redemption, terror and courage, hope and change.

Maybe You Should Talk to Someone is rev­olutionary in its candor, offering a deeply per­sonal yet universal tour of our hearts and minds and providing the rarest of gifts: a boldly reveal­ing portrait of what it means to be human, and a disarmingly funny and illuminating account of our own mysterious lives and our power to transform them.

Keep scrolling to read the top 30 Inspirational Quotes from Maybe You Should Talk to Someone by Lori Gottlieb.

Get The Book: Maybe You Should Talk to Someone by Lori Gottlieb available now on Amazon.

Which quote from Maybe You Should Talk to Someone by Lori Gottlieb is your favorite?

Learn How To Manifest

Creativity by John Cleese is a short and amusing guide that shows how creativity is a skill that anyone can acquire. Drawing on his lifelong experience as a writer, he shares his insights into the Read more…

How to Manifest Money In 5 Steps

One of the most common things people want to manifest is money. Well, I’m here to tell you that it’s absolutely possible to manifest financial abundance in your life, especially if it is backed by Read more…

30 Best Quotes From The Book of Moods by Lauren Martin

The Book of Moods by Lauren Martin is about the author’s journey to infuse her life with a sense of peace and stability. She dives into the universal triggers every woman faces with observations that Read more…