Why is it called Dear Girls? Dear Girls is structured as a series of raw, no holds barred letters to her two daughters.

The book covers everything they need to know in life, like the unpleasant details of dating, how to be a working mom in a male-dominated profession, being a daughter of Asian immigrant parents, and most importantly – how she trapped their dad.

Ali Wong is a stand-up comedian, writer, and actress.  She has released two hit Netflix comedy specials—Baby Cobra and Hard Knock Wife—and starred in the Netflix original film Always Be My Maybe alongside Randall Park.

Word of Caution: if you’re easily offended by raunchy and crude humor, this book is not for you.

Keep on reading for 35 funniest quotes from Dear Girls by Ali Wong.

Get The Book: Dear Girls by Ali Wong available on Amazon.

Quotes On Being Asian American 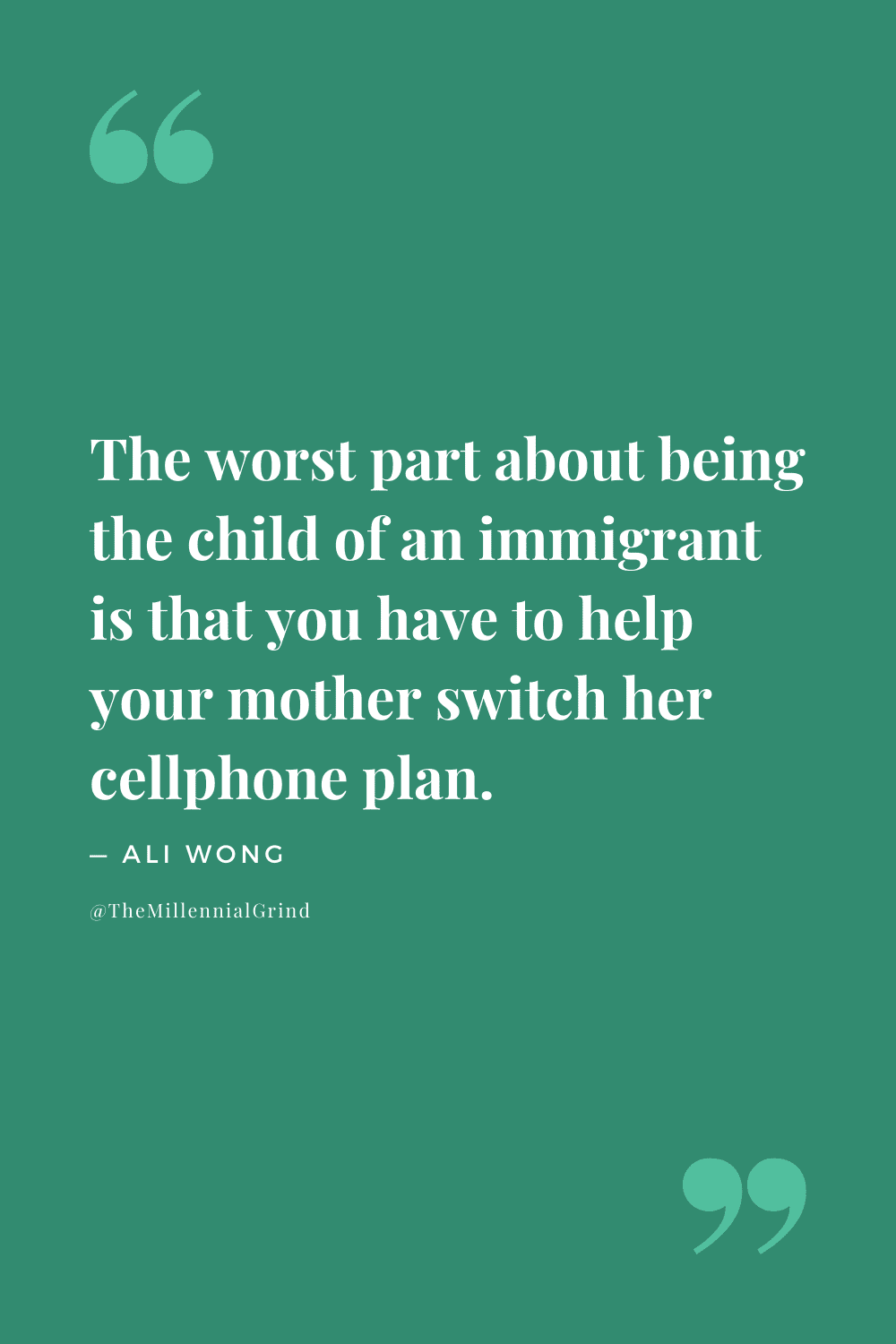 1. The worst part about being the child of an immigrant is that you have to help your mother switch her cellphone plan.

2. My parents trained me to always picture the worst-case scenario as some sort of immigrant survival tactic.

3. Bitch, you used to call me a fucking vulture for eating my meat to the bone and sucking out the marrow. Now you’re fishing for “Likes” with it??

4. Her grandfather co-ran a major felt company. Yes, that’s what we mean when we say white people are beginning from a different starting line than everyone else.

5. No matter how hard you study or work, you cannot compete with someone when their grandparents manufactured motherfucking felt, a material so iconic that even you two girls could recognize it by the age of one.

6. I didn’t vacuum and swiffer my floors so you could spread crackhead doo-doo and rat placentas all over them.

7. I fantasized about having a mother who was also raised on Sesame Street, Happy Meals, and John Hughes movies.

8. I also understood why my mom wasn’t into processing her feelings, and how she was taught to just get over tragedy. To survive, she had to believe things like depression and allergies were a choice. 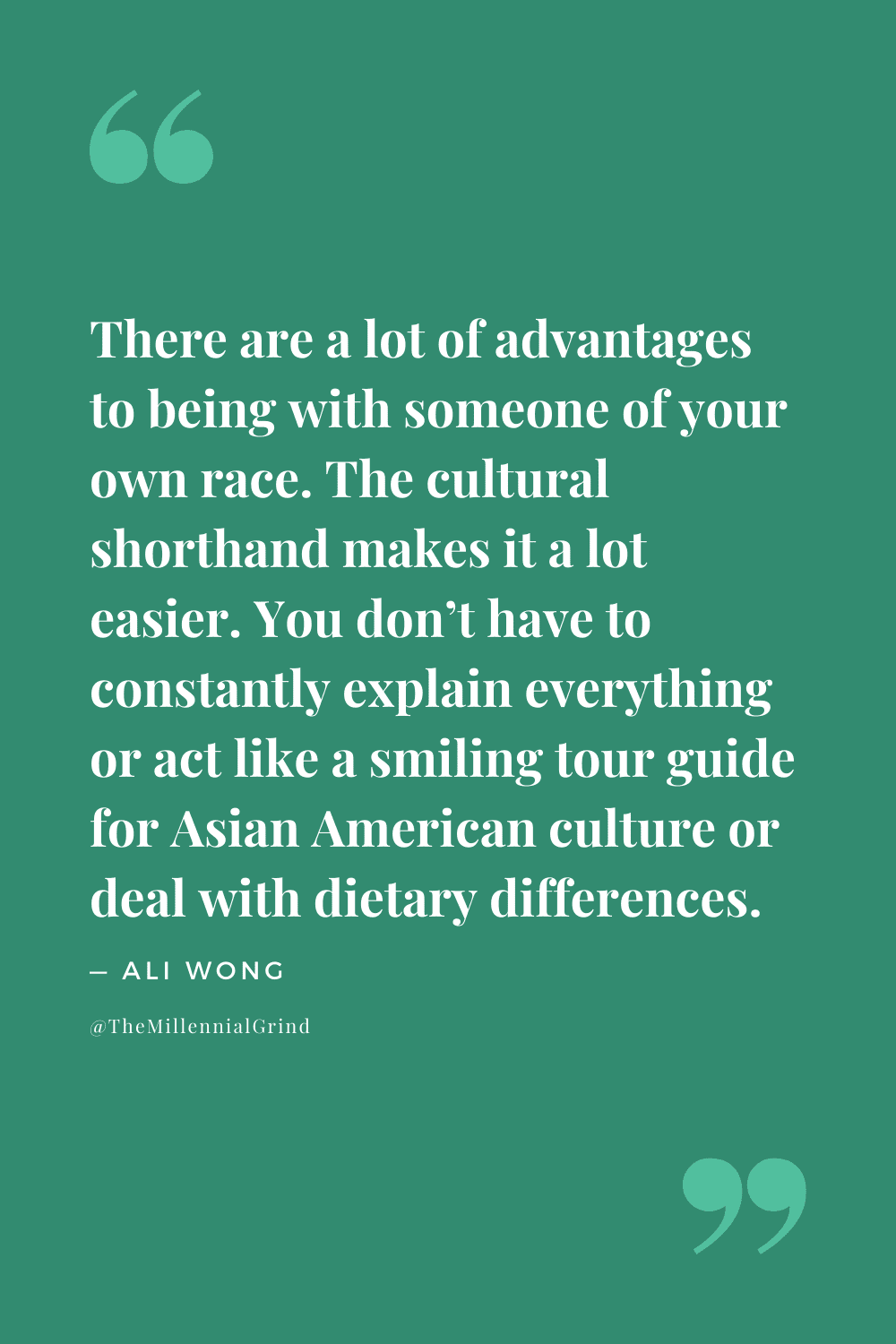 9. There are a lot of advantages to being with someone of your own race. The cultural shorthand makes it a lot easier. You don’t have to constantly explain everything or act like a smiling tour guide for Asian American culture or deal with dietary differences.

10. A man who’s down to eat fermented cabbage is also probably down to eat butt after a long, humid summer day. Probiotics!

11. Asian men are basically those blue Na’vi people from Avatar, only without the magic sex braids.

13. Non-Asian men I dated loved to brag about how “down” with Asian cuisine they were. One actually said to me enthusiastically, “I eat kimchi!” In my head I was thinking, Bro, that is the staple of Korean cuisine. That’s like me bragging to white people that I can identify with them because I eat bread.

14. If you can’t handle me when I show you my gaping butthole, you don’t deserve the rest of me.

Quotes on Being a Comedian 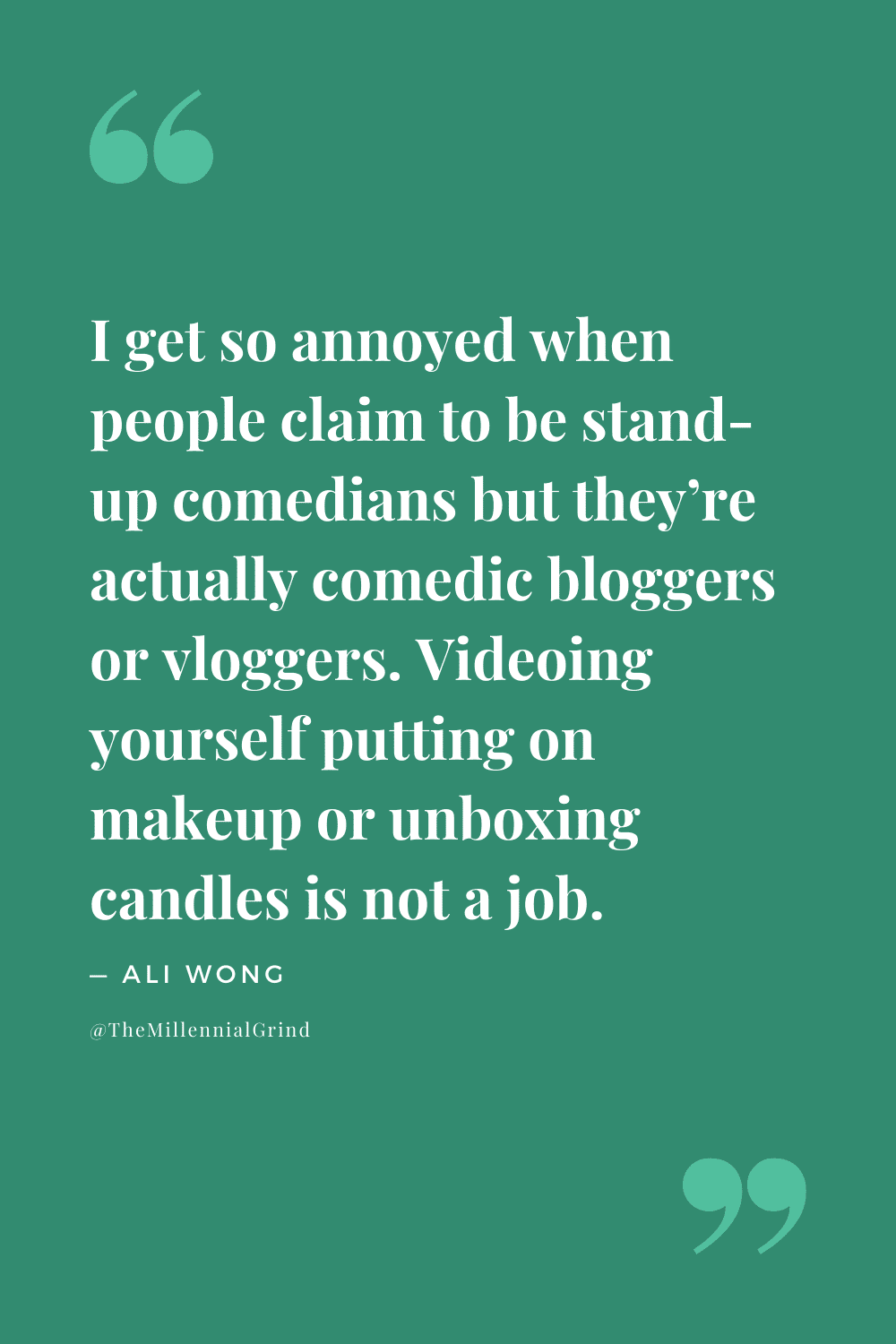 15. I get so annoyed when people claim to be stand-up comedians but they’re actually comedic bloggers or vloggers. Videoing yourself putting on makeup or unboxing candles is not a job.

16. The act of doing stand-up itself isn’t that hard. Getting on stage in front of strangers, writing and performing jokes, and even bombing, is the easy part. It’s everything else surrounding it that’s so difficult.

18. The answers to making it, to me, are a lot more universal than anyone’s race or gender, and center on having a tolerance for delayed gratification, a passion for the craft, and a willingness to fail.

19. Nobody is great at stand-up comedy right away and it’s important to have room to experiment, find your voice and, most important, to fail.

20. When you take more than five evenings in a row off from doing stand-up sets, you risk becoming unfunny and out of touch.

22. I don’t use words like “facetious” or “effusive.” I use words like “doo-doo,” “caca,” and “punani.” Once I embraced that, these letters were an absolute pleasure to write.

Quotes on Studying Aboard in Vietnam 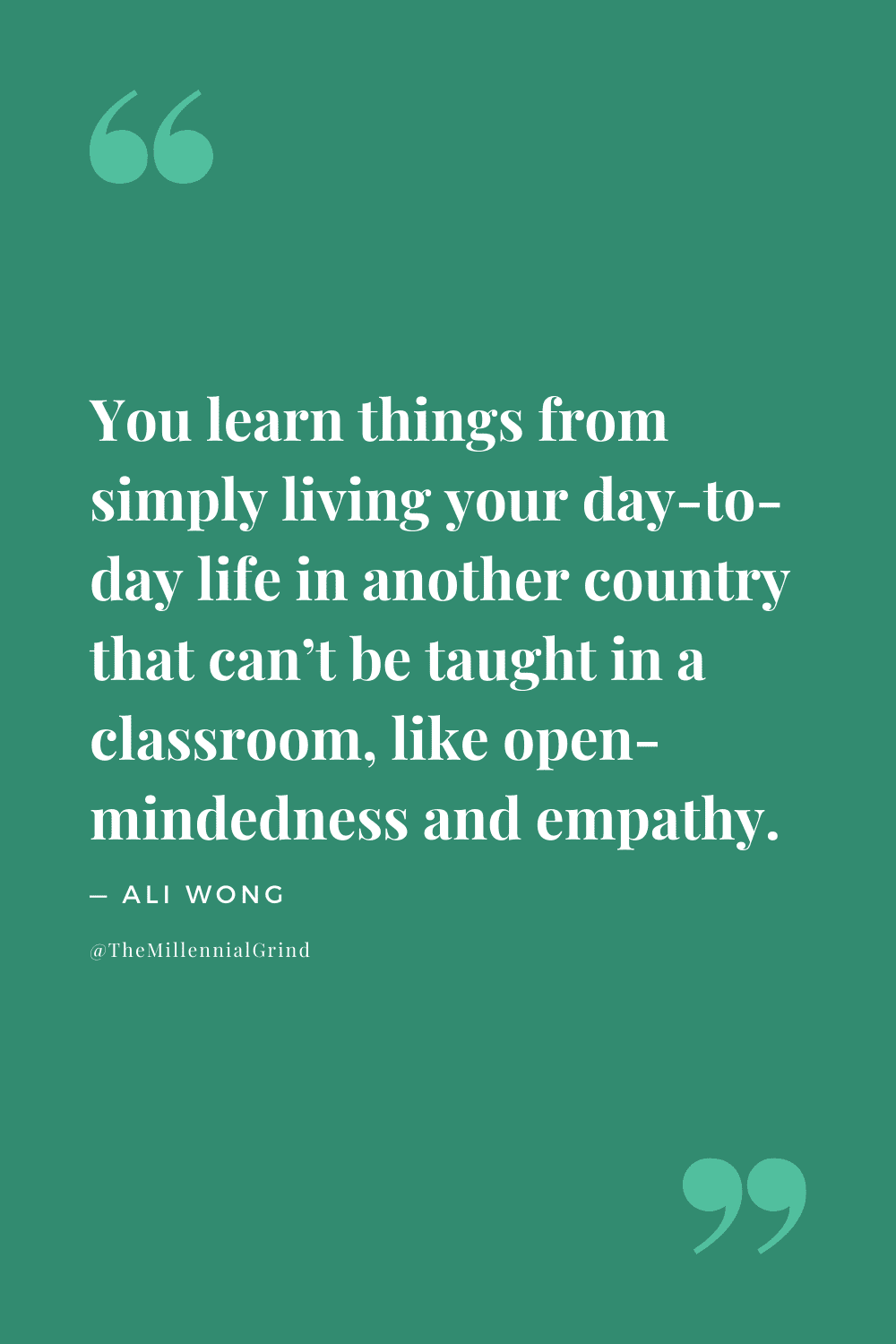 23. You learn things from simply living your day-to-day life in another country that can’t be taught in a classroom, like open-mindedness and empathy.

24. I walked into one store to find some new clothes, and the young girl aggressively yanked a pair of pants out of my hands and said in broken English, “This: small. You: bigger.”

25. “I’m an expat” is a very fancy way for these men to say “No one would fuck me in America” and “I’m a pervert who wants to sleep with as many Asian women as possible.”

26. It’s a miracle I was able to even get an education while being so focused on eating.

27. Old people did small movements in the park to corny-ass music but that’s not real exercise. That’s called not being dead.

Quotes on Being a Mom 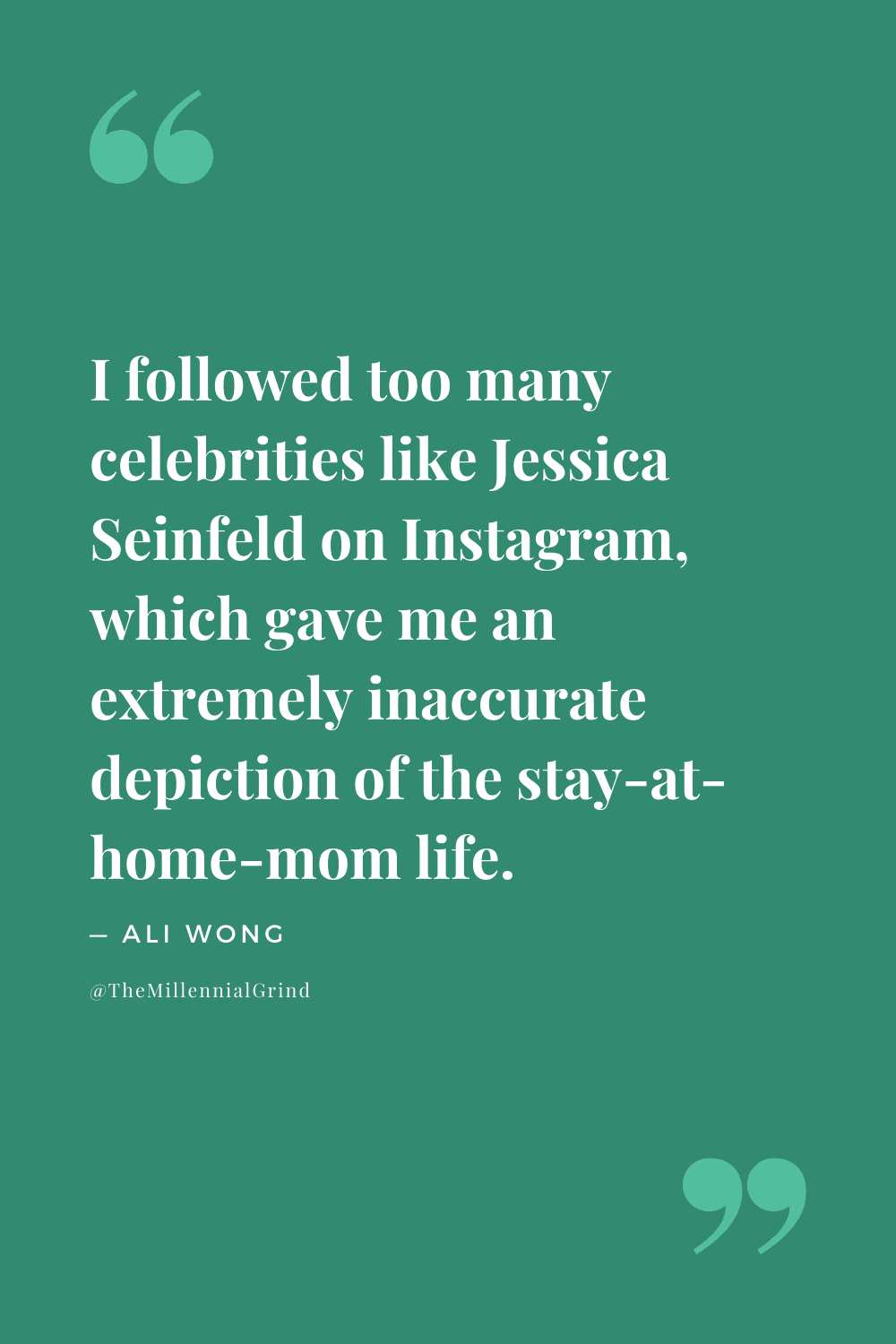 28. I followed too many celebrities like Jessica Seinfeld on Instagram, which gave me an extremely inaccurate depiction of the stay-at-home-mom life.

30. Being a working mom is not easy and I constantly feel like I’m failing at both working and being your mom.

31. Either way, I know what I have in common with stay-at-home moms: We are all just doing our best. And if it isn’t good enough for you, wait until you have kids and you’ll get it.

34. My dream of having four children was replaced by utter gratitude that I was able to get pregnant three times, and give birth to two beautiful girls, who exhaust me spiritually, financially, and emotionally.

35. I made plans to eat my placenta to prevent postpartum depression and not waste any of that valuable, free nutrition (if you haven’t picked up on it by now, I’m extremely cheap).

READ NEXT: 50 Marie Forleo Quotes from Everything is Figureoutable